Attending Church Frequently may be good for your mental health. Click on the link below to access an interesting article which appears in the National Catholic Register. https://www.ncregister.com/cna/only-frequent-church-attendees-avoided-downward-mental-health-trend-in-2020-umctjjzz

Mr. Kirby,
About 10 days ago I was a visitor in St. Vincents from the cruise ship visiting Cape Giradeau.  I mentioned that there was a relatively recent person like St. Vincent who also was responsible for changing medical care for the poor.
That was Rose Hawthorne.  Here is a link to a presentation I made two years ago to some people in New York.
I hope you enjoy it.
https://www.dropbox.com/s/in4oced5df961cl/Rose%20Hawthorne%20-%20Jerry%20Cosgrove.pdf?dl=0
Best,
Jerry Cosgrove
Brentwood, New Hampshire
PS – I love your website for St. Vincents.

Public Mass is celebrated at Old St. Vincent Church every Sunday at 10:00 AM,   subject to the restrictions listed in the March 19, 2021 Pastoral Letter From Bishop Rice  (click on blue lettering to view the letter)

The Church is open for tours Saturdays from Noon until 4:00 P.M. April through October, except for days when weddings are scheduled. The scheduled weddings are listed in the Calendar. Tours are also available by appointment. Click on the following link for a virtual video tour of the church:    https://www.youtube.com/watch?v=qAo-afuOKig

The Promotion of Fr. Normand G. Varone to Monsignor on November 14, 2021 at OSV Church

Normand G. Varone was born June 29, 1939, in Woonsocket, Rhode Island to the late Joseph J. and Blaise F. (Gaulin) Varone.  His education and seminary training was at St. Philip Neri Latin School in Boston, St. Mary’s College in Hardin’s Creek, Kentucky, and Kenrick Seminary in St. Louis.  He was ordained to the priesthood June 7, 1975, by Bernard Cardinal Law in Saint Patrick Church in Cumberland, Rode Island.  Throughout his years of active ministry in the Diocese of Springfield-Cape Girardeau, Father Varone served the Diocese primarily in small, rural parishes in the southeast corner of the state.  Father Varone retired from active ministry on July 1, 2009 and has continued to serve as a faithful substitute for his brother priests in Cape Girardeau and surrounding area.  After 46 years of priestly service, Father Normand Varone becomes Monsignor Normand Varone.  Congratulations! (see Image Gallery for more pictures and details) 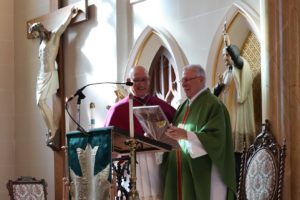 On the evening of August 21, 1879 a Heavenly Apparition occurred at the gable wall of the Parish Church in Knock, Ireland when Our Lady appeared, in the Company of St. Joseph and St. John the Evangelist. Unique to the Knock Apparition was the presence of the Eucharistic Lamb in front of a cross, standing upon an Altar and surrounded by angels. The Apparition lasted for about two hours and 15 official witnesses gave their testimonies to a Commission of Enquiry in October of that year.

The youngest witness of the Apparition was 5 year old John Curry (1874-1943). He eventually emigrated to the United States and had an obscure existence there. He died on Long Island and was buried in an unmarked grave there.  In 2015 it became known by Cardinal Dolan of New York that John Curry died on Long Island unknown, and was buried in an unmarked grave. Through the efforts of Cardinal Dolan, John’s remains were removed from the unmarked grave on Long Island and reinterred in Old St. Patrick’s Cathedral in Lower Manhattan. In 2017, some 150 Irish (including John’s relatives) came from Ireland to attend the Requiem Mass for John at Old St. Patrick’s Cathedral, presided over by Cardinal Dolan. The beautiful song ” Lady of Knock” which had become the theme song for Knock Shrine in Ireland, was sung by Knock Shrine’s music director, Una Nolan, at Holy Communion time.

The song “Lady of Knock” was written by singer/songwriter Dana Rosemary Scallon (professionally known as Dana) and released by her as a single in 1981. Dana was born in London, England, is a former member of European Parliament, and has citizenship both in Ireland and the United States.

There are two videos in the Video Library regarding the Apparition. They are the third and fourth videos in the Library. One is “The Story of Knock”, the other is “Lady of Knock”, sung by Una Nolan at the Requiem Mass. Below are pictures of a mosaic of the Knock Apparition, John Curry, and Dana Rosemary Scallon.