July 8, 1833: Fr. Timon celebrated Mass in the first temporary church which was a warehouse of Don Louis Lorimier.
It was close to the riverfront and near to the Red House, Lorimier’s home.

April 30, 1838: Cornerstone of the first church was laid by Bishop Joseph Rosati, C.M. This stone structure distinctly resembled the Old Cathedral on the St. Louis riverfront.

1850: First church of native stone destroyed by a violent tornado.

1851: Within six months construction began on the present church. The stone of the original church was used for the new foundation. The church was designed by a noted Missouri architect, Thomas Warying Walsh. The church is in the style of Renaissance architecture in which architects refer to the style of the church as English Gothic Revival.

1900: A spire of undetermined height was erected on the occasion of the golden jubilee.

1905: The spire was struck by lightning.

1912: Lightning again strikes the spires and it was destroyed by fire. The present steeple was constructed in 1912.

1926: The vestibule at the front entrance was added sometime after 1900. The shape of the church is cruciform; shape of a cross. There are nine arches intertwined in the choir loft. Architects’ speculation is that the arches were designed to support the tall spire in the original design. Pews show evidence of originally having gates (doors) as well a partitions. There was a pedestal which gave evidence of a pulpit near the front of the church.

December 1977: Old St. Vincent Church was declared a Chapel of Ease. Restoration begins. It has remained a place of worship since Father Timon came to this area in 1833.

August 2013: First wedding held at Old St. Vincents in over 30 years. Weddings will now be held on a regular basis.

2013: Exterior of the Church was resealed. 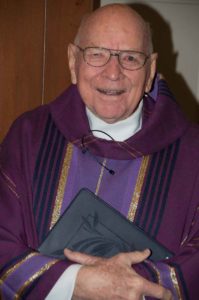 Public Mass is celebrated at Old St. Vincent Church every Sunday at 10:00 AM,   subject to the restrictions listed in Bishop Rice’s June 16 Covid-19 Restrictions Update (click on blue lettering to view the letter)

Tours are not available until further notice due to the Coronavirus pandemic. The Church is open for tours Saturdays from Noon until 4:00 P.M. April through October, except for days when weddings are scheduled. The scheduled weddings are listed in the Calendar. Tours are also available by appointment.

Click on the link below, then click on the actual link when it appears to view 23 photos from the ordination to the priesthood of Daniel Belken and Allen Kirchner at OSV on June 12, 2020. Thanks to Dennis Vollink for sharing these photos.